FOR IMMEDIATE RELEASE: Frederick calls for Flint and Shiawassee Rivers to be named national water trails

A resolution introduced by state Rep. Ben Frederick to support the designation of the Flint River and Shiawassee River Trails as national water trails by the National Park Service, was unanimously approved by the Michigan House today.

The National Water Trails System brings water trails across the nation together into one cohesive, first-class network. The system provides the public with access to outdoor recreation along shorelines and on waterways. The U.S. Secretary of the Interior may designate exemplary trails of local and regional significance as national water trails.

“The goal is to reintegrate the river as a central feature of our community rather than an industrial landmark,” said Frederick, of Owosso. “Thanks to years of cleanup and conservation efforts by numerous volunteers, people are thinking of the Shiawassee River in a more positive way; parents are now more comfortable with their kids fishing and playing in the river than they were when I was a child.”

The Flint River is a principal tributary of the Shiawassee River which flows into the Saginaw River and Saginaw Bay of Lake Huron. The river is home to bald eagles, ospreys, frogs, turtles, muskrats and a wide variety of fish. The river is rich in cultural history as it was used as a main method of transportation for Native Americans and early European settlers and later supported the city of Flint as a major hub for fur trading, lumber milling, and agriculture.

During a Feb. 14 House Tourism and Outdoor Recreation Committee meeting, Rep. Frederick delivered testimony in support of his resolution along with David Lossing, chair of the Shiawassee River Water Trail Coalition, and Tom Cook, of Owosso, who also serves as president of the Friends of the Shiawassee River.

“We hope to create a whole trail community by interconnecting the river trail with a bike trail,” Lossing said during his testimony.

House Resolution 230 was passed by the committee with unanimous support and by the full House today. 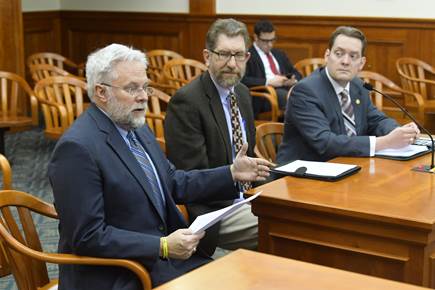